DJ Shortcuts, To Sync Or Not To Sync...

This post might seem a little passive aggressive, or possibly playing devils advocate, or both. I don't think there is anyone passionately involved in the DJ world who hasn't heard of the controversy about playing and simply pressing buttons. I wanted to take this time to explain in detail what the difference is and why its such a huge controversy, and my thoughts about it all.

Mixing "by ear" and Sync-ing, whats the difference? One of the biggest elements of talent when it came to DJ'ing was being able to match up the beats of the songs you were mixing while still providing great music and possibly doing "tricks". This originally required a lot of talent, it was part of the core of being able to DJ live, making sure you didn't have a trainwreck or galloping beats while you were mixing. It was a point of pride for myself as well as a lot of other DJ's to make sure your mixing was on point, now with the invention of shortcuts, that element is considered extinct for a lot of the up & coming DJ's. Mixing by ear requires a monitor (a speaker or one side of your headphones playing what everyone else is hearing) and your headphones to cue up the next track you were playing, follow me on that for a moment. This is why when you see a DJ mix without headphones, regardless of how high profile they are or how much "talent" you think they have, its impossible to do that by ear. This means they are using software and/or a waveform with a bpm (beats per minute) lock feature to mix for them. Without my previous information you may not have known why that was such a big deal, all the new kids are going "so what he doesn't mix by ear, he is still killing it" but what exactly is he killing? The core talent that is required to actually DJ I suppose. Letting software or a computer actually mix for you, well, its a shortcut and can be abused as we see a lot. The signs of fans meme'd all over the internet saying things like "we know you're not mixing live" and "this is prerecorded" all echoes the sentiments at the core of this debate, to mix live by ear, or use a shortcut. Some of the arguments in place of using a shortcut are to sync up the lightshows or because they had a set-list and there was no reason to play all those songs live again. So what exactly are we going to the shows for? If the DJ isn't going to actually, well, DJ, then why do we pay hundreds of dollars for tickets? The lightshow? The long lines and overpriced drinks? Call me old-fashioned, go ahead do it :), but when I go to listen to a band, I want to hear them live. When I go to hear a singer I enjoy listening to recorded on an mp3 or CD I want to hear them live, good or bad that's what I am paying for. This brings me to my next topic... 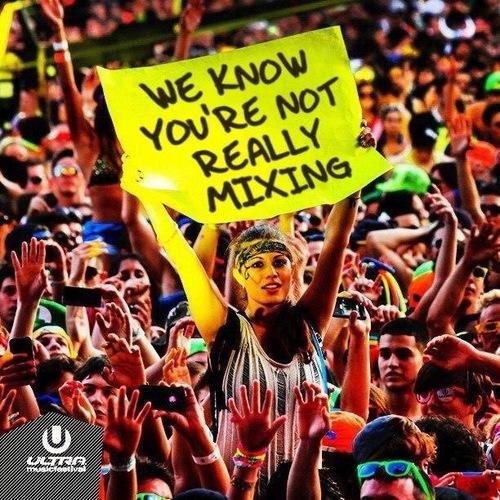 Are the public easily impressed or does the music just not matter anymore? I go to a lot of "live" ahem broadcasts and listen to a lot of podcasts and there is a lot of talent out there. Some people just know what to play and where to play it in their sets. What really burns me up is listening to someone who doesn't have a clue and watching their "fans" cheer the on like they are the next coming of Francis Grasso, don't know who that is, Google him. Its a complicated mix of emotions for me, doing this for so long and being on top of the current trends and seeing new people trying to DJ, who really have no clue, I want to cheer them on but their fans have inflated their ego to the point where there is no way to reach them. If you give them any advice, its shot down as being a "hater" (a word I despise because its lost its identity), or they act like you are a know-it-all and they just brush you off. This all comes along with the growing trend of people wanting fame but don't want to work for it. A lot of younger kids see DJ'ing as easy access to fame on the internet because of the ignorance of the majority of their fan-base. "Oooo flashing lights, buttons, little slider things and music. He is turning knobs and drums and beats are coming out, he must be doing something!" Wrong. Wrong. Wrong. The expectations of the fans needs to be higher, sorry, actually I'm not sorry, I mean it.

Shows like "Master Of The Mix" and big events giving small side stage setups for the real talent out there just show how important image has become. No matter what kind of music is out there we will have clowns (DJ Bl3nd etc.) who toss credibility o the wind and don't care about the hard work and talent, they want the fast fame and will do just about anything to achieve it. Then you have guys like Avicii who have a lot of talent, but have that one huge hit that sounds like a good idea, then it becomes the bane of their existence (Also See Baauer). Then you have guys like Nicky Romero who I think has some amazing music but does so many pre-recorded sets now I don't know why anyone bothers to book him anymore. Just put a mannequin of him on stage and pay for the rights to play directly from his Soundcloud.

I guess you can call me old school, but I like the ability to hear and feel my music as I am mixing it. I like doing tricks live and taking chances without a pre-meditated setlist. If I make a minor mistake I correct it and move on, part of what I like about DJ's mixing without a sync is hearing them juggle the tracks. Guys like Carl Cox can move an entire room of people mixing by ear, no sync, no tricks, just great music and great flows. Technology is great, making life easier is great, if you want to sync in your bedroom and podcast go for it but don't cheat your fans and fake the funk live. Anyone, I mean ANYONE can download software and put a tracklist together and sync everything they play, that's not what DJ'ing is about. Learn to admire the people that paved the way for you, learn how to mix by ear and learn how to do tricks without just pressing a button, be proud of that. I'm not telling you how to do what you do, I'm just saying that art without talent isn't art, its a gimmick. don't be a gimmick.